Ljubljana is the capital and largest city of Slovenia. During antiquity, it was the site of a Roman city called Emona. It was under Habsburg rule from the Middle Ages until the dissolution of the Austro-Hungarian Empire in 1918. Situated at the middle of a trade route between the northern Adriatic Sea and the Danube region, it was the historical capital of Carniola, a Slovene-inhabited part of the Habsburg Monarchy, and it has been the cultural, educational, economic, political, and administrative center of independent Slovenia since 1991. Its central geographic location within Slovenia, transport connections, concentration of industry, scientific and research institutions and cultural tradition are contributing factors to its leading position.

The travel guide series often place Ljubljana as one of the prettiest small capital cities in Europe, with a fairytale, picture-perfect old town of pastel colored baroque and art nouveau buildings, tree-lined river, and medieval castle perched on a hill. The city is compact and laid-back, with a youthful artsy population, and delicious food. Each year over 10,000 cultural events take place in the city, including 10 international theater, music and art festivals.

Ljubljana’s location is almost unique in offering possibilities for a quick trip (less than an hour ride) either to the Alps or Karst and to the Adriatic sea; in short, it is a very pleasant place to spend some leisure time. Mid-September is the period just after the massive arrival of tourists, and the weather is still sufficiently mild for a very pleasant visit. 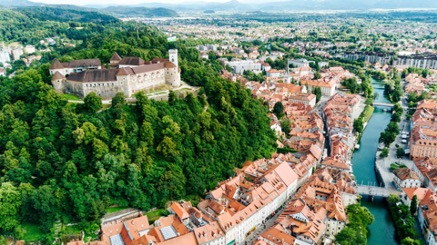